How Brainstorming Can Inhibit Your Team’s Creativity and Productivity 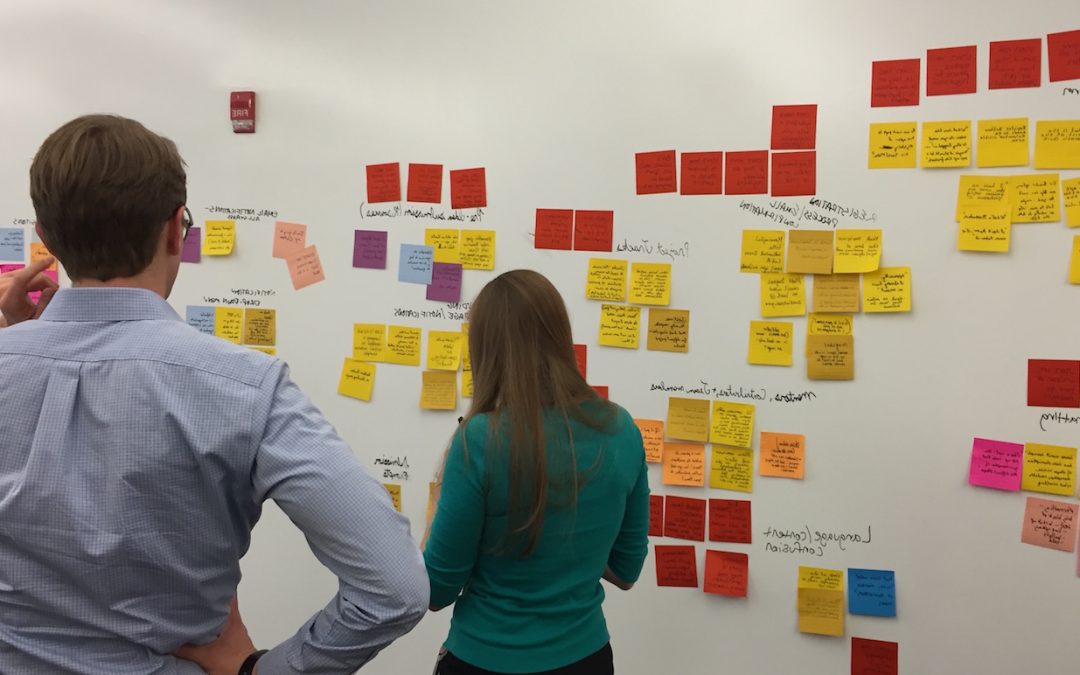 While research and experience has shown group brainstorming activity can be productive, creative and a team-building process, there is substantial evidence which also shows brainstorming has serious flaws that inhibit those same outcomes.

Brainstorming is a widely used technique for groups to develop varied and fresh perspectives on an issue, problem or project, and it is frequently taught and used by team leaders and consultants working with groups.

As it turns out, brainstorming did come about during the actual “Mad Men” era. Pioneered by advertising executive Alex Osborn in the late 1940s, it served as a way to generate a large quantity of ideas in an environment where everyone’s ideas held the same weight, which definitely wasn’t always the case back then. By democratizing idea generation, Osborn surmised, the best ones would rise to the top. In the late nineteen-forties, Alex Osborn, a partner in the advertising agency B.B.D.O., decided to write a book in which he shared his creative secrets. At the time, B.B.D.O. was widely regarded as the most innovative firm on Madison Avenue. Born in 1888, Osborn had spent much of his career in Buffalo, where he started out working in newspapers, and his life at B.B.D.O. began when he teamed up with another young adman he’d met volunteering for the United War Work Campaign. By the forties, he was one of the industry’s grand old men, ready to pass on the lessons he’d learned.

His book Your Creative Power was published in 1948. An amalgam of pop science and business anecdote, it became a surprise best-seller. Osborn promised that, by following his advice, the typical reader could double his creative output. Such a mental boost would spur career success—“To get your foot in the door, your imagination can be an open-sesame”—and also make the reader a much happier person. “The more you rub your creative lamp, the more alive you feel,” he wrote.

Your Creative Power was filled with tricks and strategies, such as always carrying a notebook, to be ready when inspiration struck. But Osborn’s most celebrated idea was the one discussed in Chapter 33, “How to Organize a Squad to Create Ideas.” When a group works together, he wrote, the members should engage in a “brainstorm,” which means “using the brain to storm a creative problem—and doing so in commando fashion, with each stormer attacking the same objective.” For Osborn, brainstorming was central to B.B.D.O.’s success. Osborn described, for instance, how the technique inspired a group of ten admen to come up with eighty-seven ideas for a new drugstore in ninety minutes, or nearly an idea per minute. The brainstorm had turned his employees into imagination machines.

The book outlined the essential rules of a successful brainstorming session. The most important of these, Osborn said—the thing that distinguishes brainstorming from other types of group activity—was the absence of criticism and negative feedback. If people were worried that their ideas might be ridiculed by the group, the process would fail. “Creativity is so delicate a flower that praise tends to make it bloom while discouragement often nips it in the bud,” he wrote. “Forget quality; aim now to get a quantity of answers. When you’re through, your sheet of paper may be so full of ridiculous nonsense that you’ll be disgusted. Never mind. You’re loosening up your unfettered imagination—making your mind deliver.” Brainstorming enshrined a no-judgments approach to holding a meeting.

Brainstorming was an immediate hit and Osborn became an influential business guru, writing such best-sellers as Wake Up Your Mind and The Gold Mine Between Your Ears. His followup book to Your Creative Power, which expanded the idea of brainstorming was Applied Imagination, published in 1962. Osborn and his associates conducted extensive research using brainstorming techniques. In most situations, they reported, brainstorming tended to be up to 44% more effective than traditional problem-solving methods.

And it has given rise to detailed pedagogical doctrines, such as the Osborn-Parnes Creative Problem Solving Process, which is frequently employed by business consultants. When people want to extract the best ideas from a group, they still obey Osborn’s cardinal rule, censoring criticism and encouraging the most “freewheeling” associations. At the design firm ideo, famous for developing the first Apple mouse, brainstorming is “practically a religion,” according to the company’s general manager. Employees are instructed to “defer judgment” and “go for quantity.”

The Elements of Brainstorming

Osborn set the following five rules for his brainstorming technique:

The process, which should be informal and unstructured, is based on two old psychological premises. First, that the mere presence of others can have motivating effects on an individual’s performance. Second, that quantity (eventually) leads to quality. 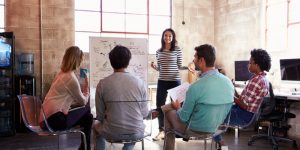 Promoters and users of brainstorming also suggest: Groups using the brainstorming process usually set a  short time limit for the session During this conception period, one or two people may be asked to serve as recorders of the ideas. If two people are recording ideas, they can take turns recording to increase the efficiency of collecting the suggestions that have been made. A chalkboard, piece of paper, or an overhead projector may be used as means of recording the ideas. One important aspect of brainstorming that should be remembered is that a brainstorming session is a true verbal free-for-all. In general, brainstorming groups with more than five people are difficult to manage. In groups larger than this, several people often do not get a chance to express their ideas. Leadership in a brainstorming group generally is not necessary, although at times a “regulator” may be necessary in groups just learning the brainstorming technique. It is important that the regulator should try to help remind the members of the group of the rules that must be followed in order for the session to be productive. After the brainstorming session, the solution(s) or criteria advanced then can be evaluated. The evaluation stage may follow immediately after the brainstorming stage. In some instances, it may be beneficial to have a waiting period before beginning the evaluation.

One major advantage of brainstorming is the enormous number of ideas that are generated from the technique. By having an open and free session, everyone can engage in the creation of ideas. This kind of atmosphere is not the usual “formal” situation, which often cramps people of their creativity. People feel good about themselves and the idea that they can contribute to the session. The cost and time of brainstorming is also another important factor. It is a relatively inexpensive technique that takes only a moderate amount of time to engage in.

Criticisms and Problems with Brainstorming–Research

Tomas Chamorro-Premuzic, writing in the Harvard Business Review argues there are several explanations as to why brainstorming doesn’t work: 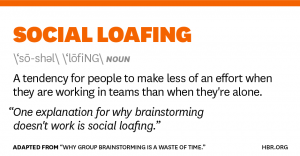 What to Do Instead of Brainstorming

A number of alternative creative idea generation and problem solving processes have been developed as an alternative to brainstorming. Here’s a brief description of some of them:

If You Absolutely Are Committed to Brainstorming, Do the Following:

Does this mean we need to scrap the practice of brainstorming altogether? I would say no. still believe there’s a lot of value in taking a collaborative approach. But there are a few ground rules to follow to make sure brainstorming sessions are actually effective:

In balance, based on the research evidence, brainstorming should be used judiciously, with lots of preparation and strict structures, and not be the only method of collaboration, and certainly not the only way to generate creative ideas.