Are You a Creative or Analytical Thinker? 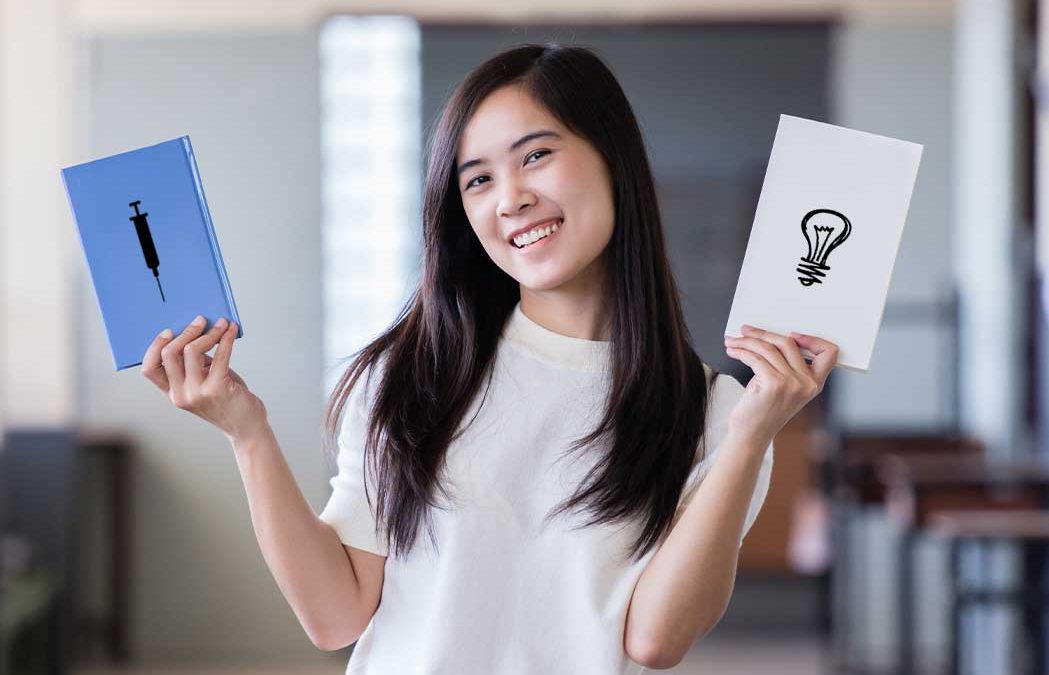 Are you a more creative or analytical thinker?

Analytical thinkers are particularly good at solving clear-cut problems by methodically working through the possibilities. Creative thinkers are more likely to have flashes of insight, or “aha moments,” that can leapfrog over many steps of thinking to solve problems that are fuzzy or complex.

A new brain-imaging study from Drexel University’s Creativity Research Lab reveals that the different “cognitive styles” of creative and analytical thinkers are due to fundamental differences in their brain activity that can be observed even when people are not working on a problem. These findings suggest new directions for the development of neuroscience-based methods for intellectual, educational and vocational assessment and counselling. The study was led by Brian Erickson, a post-doctoral researcher, and lab director John Kounios, PhD, a professor of psychology and director of the doctoral program in Applied Cognitive and Brain Sciences in Drexel University’s College of Arts and Sciences.

Each participant’s electroencephalograms (EEGs), also known as “brainwaves,” were recorded during four sessions spread over seven weeks. These EEGs were recorded while the 42 participants were relaxing in a “resting-state” with no task to perform. At the end of the last test session, they tackled anagram puzzles in which they had to unscramble a series of letters to make a word. For each anagram they solved, they reported whether the solution had occurred to them in a sudden “aha moment” or by methodically rearranging the letters until they found the word.

Anagrams are a type of problem that can be solved either insightfully or analytically, making them useful for assessing a person’s cognitive style. An example would be an anagram like BELAT, which can be rearranged to make the word TABLE. Subjects can do this analytically by rearranging the letters or it can be done in one step when the word TABLE just pops into consciousness.

The researchers then compared the resting-state EEGs of the Insightfuls and Analysts, recorded weeks earlier. The EEGs showed marked differences between these two types of thinkers. Moreover, the EEGs could predict – weeks in advance – which test subjects were Insightfuls and which were Analysts. 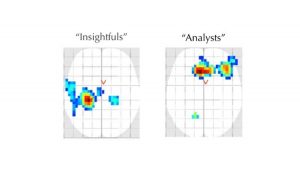 A large body of research has shown that the frontal lobe plays a key role in organizing thought and behavior by inhibiting and controlling other parts of the brain. Analysts’ high frontal-lobe activity is consistent with their methodical approach to solving the anagrams.

Past research also shows that when frontal-lobe activity is reduced, for example by damage or aging, thinking can become less focused and organized. The lower frontal-lobe activity of the Insightfuls supports a theory that creative insights occur when reduced mental focus allows unconsciously formed patterns or ideas to pop into awareness as “aha moments.”

Insightfuls’ suppressed left temporal-lobes suggest that they tend to rely on the right temporal lobe’s specialization for processing ideas that are distantly related (e.g., “number” and “table,” as in a table of numbers). The ability to integrate distantly related ideas is a hallmark of creative thought.

Importantly, the patterns of resting-state brain activity that distinguished the Insightfuls and Analysts were consistent over the seven-week testing period, thus showing stable differences between these two types of people. Moreover, these differences in brain activity predicted participants’ cognitive styles weeks in advance of the anagram test. Thus, the insightful and analytical cognitive styles are products of fundamental features of brain function that can be observed even when a person is not working on a task. These differences may fluctuate from minute to minute, but on average over longer periods of time they persist.

“This research lays the foundation for using EEG recordings to assess individuals’ cognitive style for vocational counseling, educational testing and personal development,” said Kounios, who is also coauthor of The Eureka Factor: Aha Moments, Creative Insight, and the Brain.