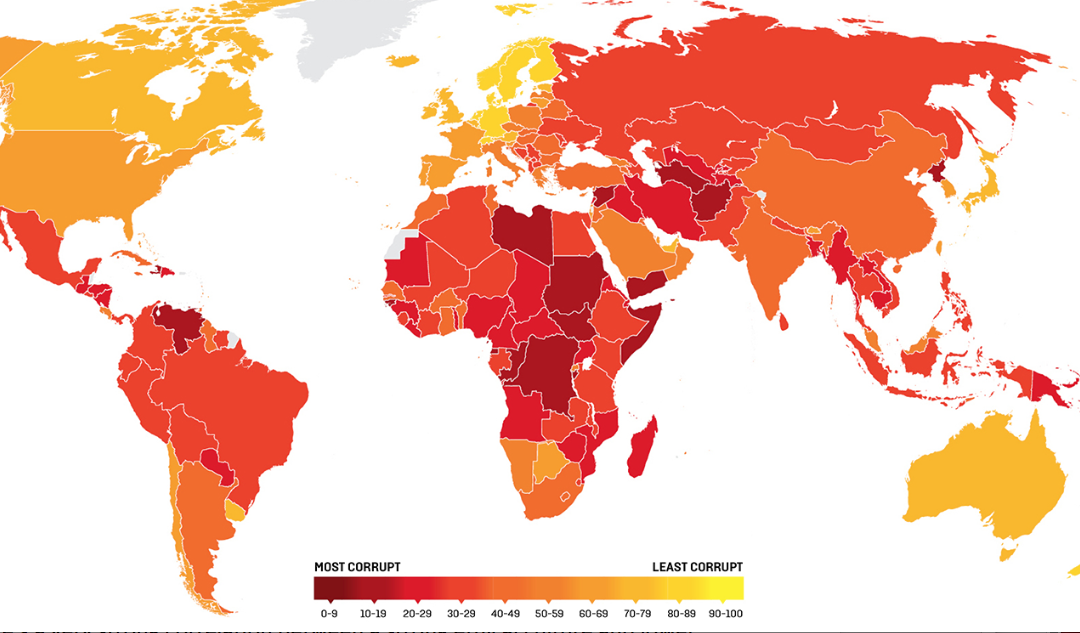 Corruption in the United States is a serious issue compared to other Western countries, according to a new global report released by Transparency International. Some experts argue the US decline is due to declining trust in democratic institutions and more recently poor oversight during the Trump administration of pandemic-related financial aid.

In the annual Corruption Perceptions Index (CPI), the United States fell to a low of 67out of a maximum possible score of 100, down from a high of 76 in 2015. By its nature, corruption is difficult to document, so the index relies on a variety of different sources to measure the level of perceived public sector corruption. Two-thirds of the 180 countries and territories included in the 2020 index scored below 50, with an average of 43. Notably the Scandanavian countries annually score the best on the index. 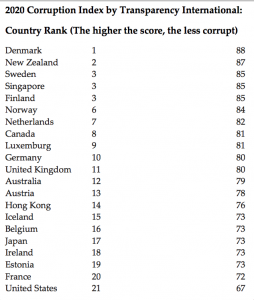 Scott Greytak, the advocacy director for the U.S. office of Transparency International, cited a broader “decay” in U.S. political institutions as a major contributor to the country’s declining rating. Significantly, Gretyak stated that there was public lack of confidence in U.S. elections caused by disinformation, fake news and record-setting amounts of untraceable money in the 2020 elections.

“These series of really bombshell exposés by media outlets that are demonstrating how much dirty money is flowing into the United States’ financial system,” Greytak said, referencing a joint investigation published by BuzzFeed News and the International Consortium of Investigative Journalists last year that revealed “how major banks had knowingly allowed trillions of dollars of suspect financial transactions to go ahead, enabling drug kingpins, kleptocrats, and terrorists to move corrupt cash around the world.”

The 2020 index also reflects how revealed how, during the pandemic, there have been numerious reports of loans issued under the Payment Protection Program, intended to support small businesses, that went to large corporations: Examples are defense contractors, the international fast food chain Shake Shack, and the Los Angeles Lakers.

“COVID-19 is not just a health and economic crisis. It’s a corruption crisis. And one that we’re currently failing to manage,” said Delia Ferreira Rubio, the chair of Transparency International.

The report found that the more corrupt a country or territory was, the less money was spent on health care, regardless of levels of economic development. “While corruption differs in scale and scope across regions, it proved to be a universal obstacle to effectively combatting COVID-19,” the report notes.

The World Economic Forum’s “The Global Competitiveness Report on Corruption” shows corruption to be a rather pervasive problem in the U.S., compared to most other OECD countries (the higher the number # the more corrupt):

In my book, Toxic Bosses: Practical Wisdom for Developing Wise, Ethical and Moral Leaders, I describe how “Research has shown that for decades the main reason chief executives were ousted from their jobs was poor financial performance of the firm. In 2018, that changed.

Thirty-nine percent of the 89 CEOs who departed in 2018 left for reasons related to unethical behavior stemming from allegations of sexual misconduct or ethical lapses connected to things like fraud, bribery and insider trading, the study found.”

I also cite the research of Stephen published in the Journal of Public Affairs: “Stephen Chen, writing in the Journal of Public Affairs, says misreporting of a firm’s financial performance increases the CEO’s confidence which in turn increases the need to misreport performance in order to feed an ever increasing ego. This growth can be fuelled by statements by third party financial analysts and the press which praise their actions. And the actions are not restricted to financial data.

These ethical issues include women exploitation, subliminal perception, and advertising to children, and deceptive advertising. The fact that potentially unethical advertisements are reaching the marketplace suggested that current methods of evaluating advertisements may be insufficient for some of today’s controversial or innovative campaigns.

In its more corrosive application — the one that is inculcated in many business schools, and enforced by corporate lawyers and demanded by activist investors and Wall Street analysts — maximizing shareholder value has meant doing whatever is necessary to boost the share price this quarter and the next. Over the years, an exclusive focus on shareholder value has been used to justify cheating or deceivingbamboozlingcustomers, squeezing workers and suppliers, avoiding taxes and lavishing stock options on executives. Most of what people find so distasteful about American capitalism — the ruthlessness, the greed, the inequality — has its roots in this misguided and twisted notion that business only exists for financial gain for the shareholders (and greedy CEOs).”

The U.S. Ethics and Compliance Initiative, (ECI) the oldest nonprofit in the ethics & compliance industry is a research and membership organization comprised by institutions across every sector, each dedicated to promoting the highest levels of integrity in their operations. ECI has provided some startling data regarding the presence of unethical practices in U.S. organizations.

According to ECI, the single biggest influence on employee conduct is the organization’s culture. In strong ethical cultures, wrongdoing is significantly reduced. Yet only one in five employees, according to ECI’s study of American business, indicate that their company has such an environment. This status remains largely unchanged over the past decade. Furthermore, in 2017, 40% of employees believed that their company had a weak ethical culture, a trend that has not notably changed since 2000.

In an article in The New Yorker, Robin Wright asks the question, “Is America Becoming a Banana Republic?” She says, “the chief principle of ‘banana-ism’ is that of ‘kleptocracy’, whereby those in positions of influence use their time in office to maximize their own gains, always ensuring that any shortfall is made up by those unfortunates whose daily life involves earning money rather than making it.” She concludes the United States clearly fits those descriptors.

Unethical Behavior Spreads Like a Virus in the Workplace

The National Business Ethics Survey of nearly 4,700 employees at by the Ethics Resource Center (ERC), an independent research firm for the advancement of high ethical standards and practices in public and private organizations, has revealed thepercentage of companies with a weak ethical culture is on therise, as is the number of employees who experienced retaliationfor blowing the whistle on observed misconduct. The report concluded that “American business may be on the cusp of a large downward shift in ethical conduct.”

Among the other conclusions of the report were the following:

You can read more about the link between leader unethical behavior and corruption in my book, Toxic Bosses, along with a comprehensive list of actions that individuals and organizations can take to reaffirm and install ethical behavior and practices.