Should You Trust Logic and Data or Gut Feelings to Make Decisions? 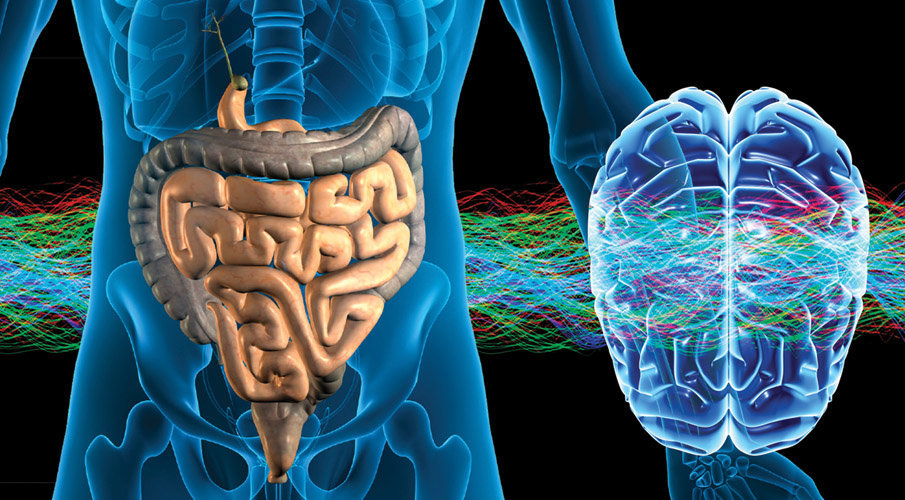 Does the amount and reliability of information prompt you to make a decision solely on logic and rationality, or does gut feeling still play a part? Are gut feelings just physical or emotional? These questions have been a subject of speculation for centuries and have taken on a new life recently because there’s new research that lends credibility to the value and accuracy of using our gut and not just our rational brain to make decisions.

A Definition of Gut Feelings

Gut feelings have been defined also as instinct or intuition; a spontaneous feeling or reaction without a logical rationale, as opposed to an fact based opinion. Usually if you have a gut feeling about something, it’s difficult to give rational reasons why.

Intuition is our ability to be knowledgeable about something without evidence or proof and without using conscious logical reasoning. It is also referred to as instinct, and is described as an unconscious process.

Gut feelings has been useful in the professions. For example, police often reported when detaining a suspect that they immediately “know” that they possess a weapon or illicit narcotic substances, but can’t provide an explanation as to how they knew.

In recent years neuroscientists and other researchers have published studies showing a clear gut-brain connection.

According to Florida State neuroscientist Dr Linda Rinaman, she argues in a paper, published in Physiology that gut-to-brain signals are a “powerful influence on emotions, mood and decisions and are often a response to worrisome or threatening stumuli and events.” She describes how the brain and gut are communicating continuously via the vagus nerve which run from the gut to the brain. It is via this conduit, Rinaman contends messages from the brain and gut are sent.

With her colleague James Maniscalco, at the University of Illinois at Chicago, Rinaman says that these signals from our gastrointestinal tract can act as a warning signal to help us stop making dangerous or bad decisions. Rinaman said.“Vagal feedback signals are very protective and encourage caution.”

In addition, Rinaman claims, our dietary habits can have a major influence over the quality of our gut’s messages to the brain, and sometimes lead to behavior or emotional state changes. For example, a high-fat diet can lead to inflammatory response in the GI tract, which, in turn, can send signals via the vagus nerve and lead to symptoms of anxiety and depression. “Evidence shows that modifying the diet, perhaps by consuming probiotics, can impact your mood and behavioural state,” Rinaman explained. 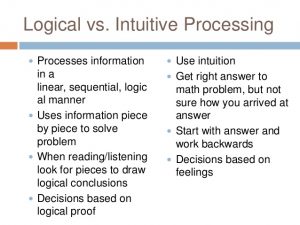 Recent research evidence demonstrates a strong connection between chronic diseases and inflammation. Inflammation is most commonly rooted in the gut. Our food choices can stimulate inflammatory ailments such as depression, anxiety, brain fog, obesity and more. Dopamine and serotonin, neurotransmitters that are linked to good moods. While most people think that serotonin is produced in the brain, scientists have found that up to 90 percent of serotonin is actually created in the gut. Dr. Helen Messer, the Chief Medical Officer at Viome, which analyzes the gut microbiome, says “the bacteria in the gut make or consume the majority of neurotransmitters in our bodies.”

Researchers at the University of Oxford Katerina Johnson (Department of Experimental Psychology) and Kevin Foster (Department of Zoology) have published a study in the journal Nature Reviews Microbiology in which they propose an evolutionary framework to show why microbes living in the gut affect the brain and behaviour.

Their research has shown that gut bacteria can influence social behavior, anxiety, stress and depressive-like behaviour. Katerina Johnson explained: “We know there are numerous possible mechanisms, including communication via the vagus nerve (major nerve linking the gut and brain), the immune system and hormonal changes, and how gut microbes produce neuroactive chemicals.

Many people experience depression and anxiety in their lives, and now research shows that a significant percentage of them will also develop bowel disorders. This is important evidence of brain-gut interactions.

Stressful events can influence the type of bacteria inhabiting the gut, and as a result make our digestive tract’s flora weaker and become more attractive to harmful bacteria. Stress can also increase inflammation in the bowel, and increase vulnerability to infection.

Research studies have shown how chronic intestinal inflammation may decrease our experience with positive emotions. And when we experience inflammatory bowel disease, our brains become rewired through a process called neuroplasticity.

In his book, The Mind-Gut Connection,, Dr Emeran Mayer writes: “Your gut has capabilities that surpass all our other organs and even rival your brain. It has its own nervous system, known in scientific literature as the enteric nervous system, or ENS, and [is] often referred to in the media as the “second brain.””

Mayer describes how our second brain — our gut — consists of about 100 million nerve cells in the gut and runs all the way from the esophagus. This “second brain” communicates with our regular brain using an endocrine and neural network in an “integrated intelligent system,” so that information flows both ways.

Research on Gut Feelings in Decision-Making

Research on the complexity of making decisions based on gut feelings is being done by Shabnam Mousavi, an assistant professor at the Johns Hopkins Carey Business School, lead author of “Risk, Uncertainty, And Heuristics,” a paper that examines the idea that gut feeling may actually be more useful in some situations than rational logic. Their research builds on Nobel prizewinner Daniel Kahneman’s work, which showed how we make instant judgments based on intuition rather than lots of information.

Mousavi argues that too much information can be just as misleading as a gut feeling hunch in some circumstances. One example he cited an experiment in which German and U.S. students could guess which city was larger: Detroit or Milwaukee. The result: the German students got 90% and the American students got 60% correct. The researchers determined the reasons was the Germans picked the one they’d heard more about and guessed it was the larger. Americans, armed with “knowledge” of these cities didn’t reach for the obvious — and failed.

Similarly, some studies have shown that amateur investors have as good a record of picking better stocks than experienced financial experts when the stock names were recognizable. 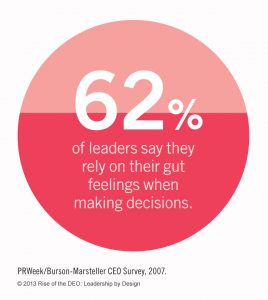 When you think about how much data is flying at us at any given minute: over 100 billion emails are sent and received every day this year alone, there may be something to be said for stanching the fire hose of information that threatens to clog up our brain with useless facts.

Joel Pearson Associate professor of psychology at the University of New South Wales in Australia, published a study in the journal, Psychological Science, which found evidence that people can make better, faster, more accurate and more confident decisions using their intuition or gut feelings.

A new study highlights the important role human intuition plays in medical decisions. MIT scientists analyzed 10 years of data on intensive patients and found that their doctors’ gut feelings on their patients subsequently the diagnostic tests they ordered. According to MIT study lead Mohammad Ghassemi, “there’s something about a doctor’s experience, and their years of training and practice, that allows them to know in a more comprehensive sense, beyond just the list of symptoms, whether you’re doing well or not.”

Other studies have shown that training medical trainees to use their intuition led to equal or greater accuracy in diagnosis.

Intuition and Gut Feelings in Business

Steve Jobs was famous for making critical decisions at Apple using his intuition and gut feelings. For example, Jobs accurately predicted in 2010 that one day the tablet would replace the PC, even though industry data didn’t support his intuition. the tablet could actually overtake the PC one day, despite many data reports to the contrary.

Richard Branson, founder of Virgin once said, “I rely far more on gut instinct than researching huge amounts of statistics.” A Fortune Knowledge Group study reported that 62% of executives rely on gut feelings frequently when making big decisions.Relying on your gut feeling or intuition generally is not taken seriously in the Western world where data and analytical thinking has been steadily promoted over the past decades. Similarly, there is a common view that emotions don’t play an important part in decision-making, compared to cold logic and information

This attitude shows an ignorance of recent neuroscientific research on our cognitive processes. Emotions are not just primitive or stupid responses that always need to balanced or corrected by our rational faculties. Emotions are part of our information processing system.

Gary Klein, in his book, Intuition at Work, argues intuition is “at the center of the decision-making process,” and that analysis is, at best, “a supporting tool for making intuitive decisions.” 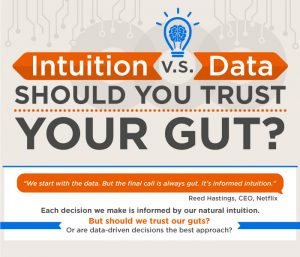 Managers who use their gut instinct together with simple decision-making strategies may make equally good, but faster, decisions as those who use data to reach an outcome, according to a study co-authored by academics at King’s Business School, and the University of Malta, finds that the reliance on data analysis in decision-making might be counterproductive as this reduces decision-making speed without ensuring more accuracy. The research, based on information from 122 advertising, digital, publishing, and software companies, found that using data to inform decision making when there is a high level of uncertainty, is not a good practice.

Dr. Oguz A. Acar, Reader in Marketing at the Business School and co-author of the report, said: “This research shows that data-driven decision-making is not the panacea in all situations and may not result in increased accuracy when facing uncertainty. Under extreme uncertainty, managers, particularly those with more experience, should trust the expertise and instincts that have propelled them to such a position.”

So it appears that our current knowledge of the gut-brain connection and how information is processed in our brains lends new credibility to the value of listening to our gut when we have to make important decisions.