The Myth of the Self-Made Man (and Woman) in America 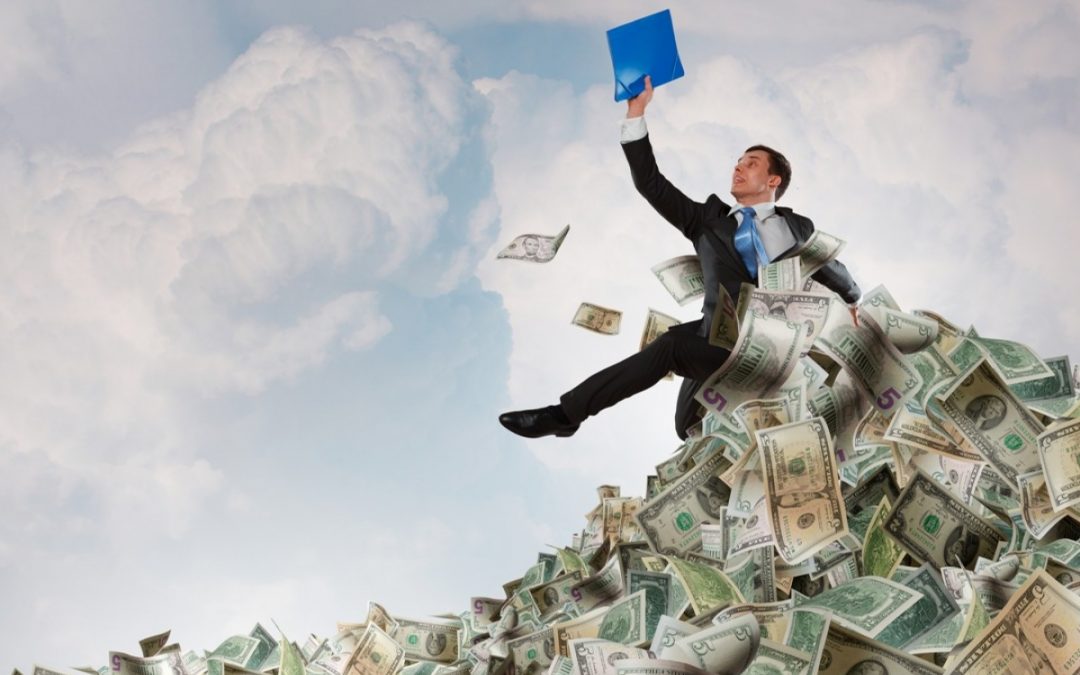 The Myth of the Self-Made Man (and Woman) in America

We are inundated in mainstream and social media with stories of the rich and famous, emphasizing they were self-made, and implying anyone in America can successfully emulate them. The belief in this myth is in contradiction to increasing wealth inequality and declining social mobility in America.

In my article, “The American Myths of the Self-Made Man, the American Dream and Meritocracy,” I argued the following: 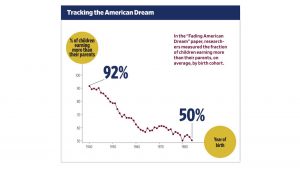 Warren Buffet, the second richest man in the world said, “I personally think that society is responsible for a very significant percentage of what I’ve earned.”  Erick Schmidt, Chairman and CEO of Google says, “Lots of people who are smart and work hard and play by the rules don’t have a fraction of what I have. I realize that I don’t have my wealth because I’m so brilliant.”

Malcolm Gladwell, in his book, The Outliers, attacks America’s myth of the self-made man. Gladwell’s meticulous research has shown that enormously successful people like Bill Gates, The Beatles, and professional athletes, scientists and artists, all had people in their lives who helped them get there.

Former Governor of California, actor and bodybuilder Arnold Schwarzenegger, who made the commencement address at the University of Houston , told students that community is crucial and that there is no such thing as a “self-made man.” The concept, he said, “is a myth.” The former host of NBC’s “The Celebrity Apprentice” said that he wouldn’t be where he is without the help of many other people, including “my parents, my mentors, my teachers.”

Kerry A. Dolan, writing in a recent issue of Forbes,argues, ““Soon after Forbes published our 2018 list of America’s Richest Self-Made Women on Wednesday — featuring cosmetics mogul Kylie Jenner of the Jenner-Kardashian clan on the cover — questions started popping up online. How could Kylie Jenner be self-made? She comes from a wealthy, famous family. Her half-sister Kim Kardashian West helped make her famous. Her mother helped build her business.” Forbes magazine recently published a story entitled “Kylie Jenner’s Web of Lies and Why She’s No Longer a Billionaire,” states, “Filings released by publicly traded Coty over the past six months lay bare one of the family’s best-kept secrets: Kylie’s business is significantly smaller, and less profitable, than the family has spent years leading the cosmetics industry and media outlets, including Forbes, to believe. Of course, white lies, omissions and outright fabrications are to be expected from the family that perfected—then monetized—the concept of “famous for being famous.” But, similar to Donald Trump’s decades-long obsession with his net worth, the unusual lengths to which the Jenners have been willing to go—including inviting Forbes into their mansions and CPA’s offices, and even creating tax returns that were likely forged—reveals just how desperate some of the ultra-rich are to look even richer.” 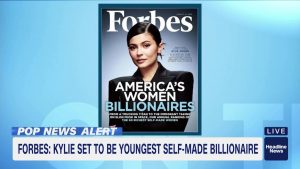 Can you really call Jeff Bezos “self-made” when his parents gave him $300,000 to start Amazon?  A 20-year-old Branson embarked on an illegal, scheme with his company Virgin Records. To avoid paying the 33-percent domestic tax levied on all records sold in England, he would instead tell the government he was exporting them. Richard Branson was sent to jail briefly, for but negotiated a settlement with the government: He would pay John Bull back £60,000 pounds (£15,000 up front and £45,000 over the next three years) or be re-arrested. But before this, he had to make a £30,000 bail. Virgin Records was broke and Branson was broke. So his mother mortgaged her own house to foot the bill. Bill Gates’ mother, Mary Gates played a big part early on in the success of her son Bill and Microsoft. Being on the Board of United Way, she met the CEO of IBM, who was eventually introduced to Bill Gates. This encounter eventually led to Microsoft and IBM striking the software deal. Mary Gates was a well respected and influential woman who eventually helped to launch Microsoft.

In Canada, we see a similar story. Kevin O’Leary, who claims to be the “self-made” free market multi-millionaire got a $10,000 loan from his mother to start his first business back in 1983 after attending university when tuition was basically free.

And of course, there is the example of Donald Trump who claims to be self-made, who received, as he claims  a “small loan of a million dollars” from his dad to start his business, but research shows he in fact received many millions for years later to help him.

Behind many self-proclaimed bootstrapped billionaires is not just their parents’ cash but also the soft assets, or what sociologists call “social capital,” that come along with being raised in and around wealth.

“There are no self-made millionaires and billionaires. You either get rich through inheritance or by being born into a stable, peaceful and prosperous society. Either way, wealth acquisition is determined by winning the birth lottery. For that reason alone, you owe something back to society if you’re lucky enough to win that lottery.” Those are the words of Warren Buffett who has said that had he been born with the same talent but in a rundown Third World nation, he would have never become a multi-billionaire. He’s right.

An estimated 34% to 45% of wealth in the U.S. is inherited, according to a 2005 study by the National Bureau of Economic Research, and intergenerational class mobility is notoriously difficult, depending on where you grew up and what your racial identity is. The “self-made” story isn’t just wrong — it’s dangerous and discourages action to challenge the seemingly inevitable status quo.

All of these truths point to the existence of a “built-together reality“ as put by Brian Miller and Mike Lapham in their book The Self-Made Myth: And the Truth about How Government Helps Individuals and Businesses Succeed. According to the 2017 “World Ultra Wealth Report” by research company Wealth-X, self-made individuals, mainly men, have “largely driven” global “wealth creation” from 1997 through 2017. The report noted that while there are an increasing number of women who are designated as high net worth, most inherited their wealth and only a small percentage sourced their wealth as self-made.

In September 2011, Elizabeth Warren challenged the concept of the self-made man in a video that went viral, garnering over one million views on YouTube: “There is nobody in this country who got rich on his own. Nobody … You built a factory out there? Good for you. But I want to be clear: you moved your goods to market on the roads the rest of us paid for; you hired workers the rest of us paid to educate; you were safe in your factory because of police forces and fire forces that the rest of us paid for. You didn’t have to worry that marauding bands would come and seize everything at your factory, and hire someone to protect against this, because of the work the rest of us did.”

A 2007 Treasury Department study of inequality allows us to examine mobility at the most elite level. On the horizontal axis is an individual’s position on the income spectrum in 1996. On the vertical level is where they were in 2005. To examine the myth of mobility, researchers focused on the chances of making it into the top 10, 5 or 1 percent. They that these chances are abysmal. Only 0.2% of those who began in the bottom quintile made it into the top 1%. In contrast, 82.7% of those who began in the top 1% remained in the top 10% a decade later. 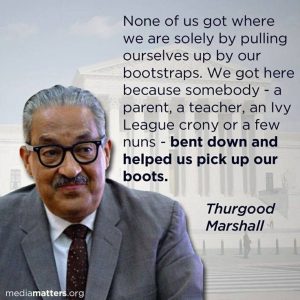 A recent Pew Survey finds, “Nearly nine-in-ten (87%) agree that: ‘Our society should do what is necessary to make sure that everyone has an equal opportunity to succeed.’ The share agreeing with this statement has varied little over the past 22 years.” It’s certainly true that people on the lowest rungs of the economic ladder are more skeptical of markets and the story of upward mobility. But their voices rarely reach politicians. A recent study by David Broockman and Christopher Skovron finds that “conservative politicians systematically believe their constituents are more conservative than they actually are by more than 20 percentage points on average, and liberal politicians also typically overestimate their constituents’ conservatism by several percentage points.”

In summary, while it may be helpful or motivating to some people to believe anyone can become wealthy and successful in America, regardless of economic and social status, the evidence increasingly does not support that belief. The media is largely perpetuating and glamorizing the myth of the self-made man (and woman) and deflecting attention from the real problems in America—income inequality and a lack of social mobility. 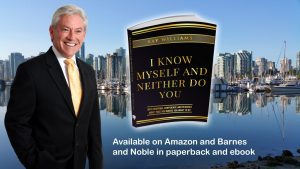